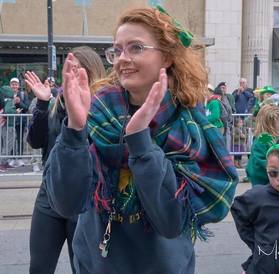 ​ Principle Teacher Little Rock:
​ Marisa Cook, TCRG
Marisa Cook began dancing in 2000 at the DeNogla School of Irish Dance in New Jersey.  In 2007, she moved  to Little Rock and began competing for the McCafferty Academy.  Marisa has qualified as a solo competitor for the Southern Region Oireachtas from 2008-2016 as well as the North American Nationals from 2014-2016.  Her highest placements as a soloist were 13th in U20 and 32nd in Ladies 20&over. She competed in the 2008 World Championships as a team competitor.  She has been an assistant teacher to Judy and PJ since 2010, and became a certified TCRG in the fall of 2017.  Ms Marisa's passion in life is to spread the joys of Irish dancing to all that attend the McCafferty Academy.

Principle Teacher Tahlequah:
​ Lena Gladkova-Huffman, TCRG
Lena Gladkova-Huffman began her training in ballet when she was 6 years old in Russia.  Having moved to the  USA after graduating medical school in 2007, she met Mrs. Judy in 2009 and became The McCafferty's regular  student.  She quickly qualified to compete in the Oireachtas and continued through her grades achieving  Open Champion status in 2016, which has in turn fulfilled her dream of dancing on the National stage.  Apart  from   her competitive career, Ms. Lena, as she is known to her students, began teaching Irish Dance under Ms. Judy in Tahlequah, OK.  Her students have have qualified for the Southern Region Oireachtas as solo, team and ceili competitors.  Ms. Lena owns and operates her own dance studio, Academy of Performing Arts, where she has been teaching Russian ballet and Irish dance, along with several other teachers in various disciplines for 5 years; she is also the chairperson of the Encore Performing Society- a 501c3 organization dedicated to Immersion in Arts through education and participation. Lena became a certified TCRG in the winter of 2017

Judy McCafferty, TCRG/ADCRG/SDCRG
Judy McCafferty established her dance school with her husband, PJ, in 1971 in Cleveland, OH.  In 1997, the duo moved to Arkansas and began their new school in Pine Bluff.  Since then, Ms. Judy has traveled throughout Arkansas and Oklahoma to teach the traditional form of Irish Dance to thousands of children and adults.  Not only is Ms. Judy an established teacher, but a certified adjudicator and examiner.  Judy was the Southern Region Director from 2009-2014, and co-chair of the North American Irish Dance Championship in 2016.  Judy and PJ were inducted into the North American Feis Commission Hall of Fame January 2017.   Although Judy and PJ McCafferty retired from teaching Irish dance in 2017, they have let their students-who have now become teachers- continue their legacy and spread Irish dance to Oklahoma and Arkansas.
MCCAFFERTYACADEMY@GMAIL.COM